Our Director of Music, Jamal Sutton, took up the position in April 2022. 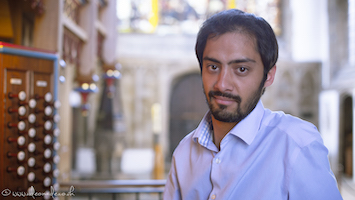 Jamal Sutton (MA BMus (Cantab) ARCO) is Assistant Director of Music and Organist at Charterhouse School. As well as helping to run a busy music department, he teaches academic music as well as organ and composition. He can also be found on the hockey pitch coaching his mighty U14D team, the cricket pitch coaching his U15A team or down the road as a deputy singer at Guildford Cathedral and, previously, Winchester Cathedral.

Previously, Jamal was Assistant Director of Chapel Music at Winchester College for seven years, where, as well as playing for the weekly services, concerts and broadcasts, he assisted in the training and conducting of the Quiristers and Chapel Choir. Jamal was also Director of Cantores Episcopi, the College’s highly successful close harmony group. His discography with the Chapel Choir includes Deep River: Music for Lent, Holy Week and Passiontide for Regent Records, Stanford: Choral Music and Mozart Requiem for Convivium Records. With Cantores Episcopi, discography includes Christmas with Cantores: Close harmony from Winchester College, Steal Away Home: Folksongs and Spirituals and most recently Amate: Love songs in close harmony. Jamal has also performed with the group alongside the King’s Singers and Aurum Vocale.

Jamal has been organist and harpsichordist for the St Endellion Easter Festival since 2011. Previous highlights have included performances of Fauré’s and Duruflé’s Requiem, Bach’s Brandenburg Concertos, Elgar’s The Dream of Gerontius and both of Bach’s St Matthew and St John Passion. Jamal attended Magdalen College School, Oxford, before taking up the organ scholarship at Sidney Sussex College, Cambridge. In his final years at University, he also held a Choral Scholarship at Jesus College.

When he joined Southern Voices, Jamal said
“Taking on the role as Musical Director of Southern Voices is a truly exciting venture and prospect. With such a fine history and establishment, and in recent years branching out to varied and interesting programming, this is a choir that I know I will thoroughly enjoy directing. For me, this is a chance to bring together and work with an ideally sized ensemble, one with a fine tradition of singers in a highly musical county and the chance to work with keen, enthusiastic and hard-working musicians. I’ve lots of ideas and plans for the choir (which you’ll have to come to a concert and discover for yourselves!) but I’m looking forward to continuing the excellent tradition of music making laid down by my predecessors. Development of a choir is through its repertoire and interesting concert listings, as well as the regular choral “classics and standards” that everybody enjoys singing and listening to! I’m really excited to meet the choir and start making music.”